You are picked up at your accommodation and begin the journey with a spectacular scenic drive along the Callejon de Huaylas Valley and then into the Huascaran National Park, past the turquoise Llanganuco Lakes and over Portachuelo de Llanganuco Pass 4785m and then down to Vaqueria (3700m) which is the starting point of the trek 4 hours drive. There are opportunities for photo stops along the way. From Vaqueria our equipment is loaded onto the donkeys and we have a 5 hours hike on a gradually rising path to our campsite in the Paria Valley 3890m. Today we will have the opportunity to see local shepherds and farmers working on the fields using traditional methods.

Today is a demanding day. We ascend gradually for about 4 hours and then we make a steep ascend for one hour to the pass Punta Union at 4750m. From the pass, we have very close views of the big mountains of the Cordillera Blanca such as Nevado Taulliraju, Pucajirca, Rinrijirca, Artesonraju and many others and fantastic views down into the Santa Cruz Valley. From the pass, we descend to our camp at Taullipampa 4250m. 7 to 8 hours walk.

Today we can do a side trip up to a viewpoint in the Quebrada Arhuaycocha valley, from where there are great views of Nevado Alpamayo, Quitaraju and Artesonraju mountains. We then have a long descend along the Santa Cruz valley passing a big lake to our last campsite at Llamacorral 3750m. 6 to 7 hours hike. 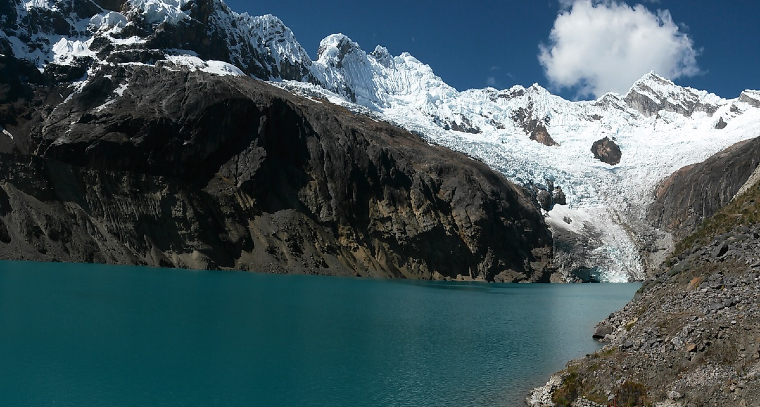 We walk down Quebrada Santa Cruz Valley to the village of Cashapampa at 2900m and then drive back to Huaraz. 3 hours walk and 3 hours drive.

This is a major factor on this trek and we strongly recommend that you arrive in Huaraz at least 3 days before the trek departs and spend time doing day hikes to higher altitude, this will help with acclimatization to the new altitude.

In order to get the most out of the trek you should be in reasonably good physical condition. It is not easy to grade the fitness level required for the trek, since it is a subjective matter. However, we have classified this trek as moderate. We trek approximately five to seven hours per day with a long ascent to 4750m and a long descent.

Rodolfo, I really appreciated your easy going nature. Thank you for a great trip and great service. Hayden, Australia

Rodolfo and his crew were totally professional, knowledgeable and energetic, always willing to help. They could not have made the trip any better. Evans, USA

I had a really great time in Peru! Thank you again for being a great guide. Illiana, USA

A trek with a 10 out of 10 Wow factor! From start to finish Rodolfo and our trekking team were amazing. Sonia, Australia